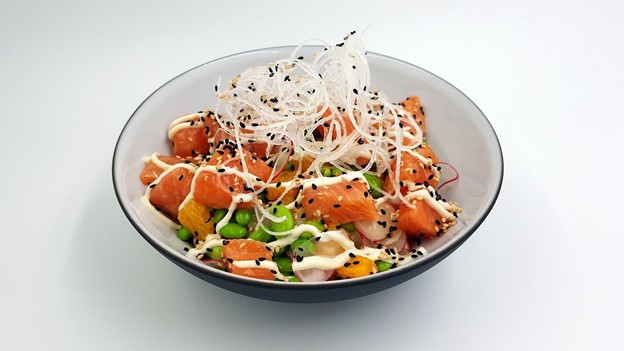 On the tropical island of Hawaii, there are numerous things to look out for, the cool calming breeze, the captivating landscape, the tall mountains, and the warm hospitality. Apart from the breathtaking views Hawaii has to offer, the Island is also known for its wide array of dishes. Walking through the streets from one restaurant to another diner, you are treated to olfactory goodness.

Some visitors to the Hawaiian Island look forward to the sumptuous and satisfying dishes available on the Island. In the event you are visiting, and you are confused about the dishes to try out, here is a list of the most popular Hawaiian dishes that are available to you on the island.

1. Kalua Pig
This delicacy is considered a Hawaiian traditional dish. This famous cuisine is a pork dish. It is often prepared in an underground oven usually referred to as imu. The pork is slowly roasted in the underground oven till it becomes very tender with a unique and thick smoky flavor. The kalua pork delicacy shares some similarities with a South American pork dish. The major difference between the two is a “thick smoke flavor” as opposed to the characteristic barbecue sauce. Generally, kalua pig goes particularly well with a nice big bowl of rice.

2. Laulau
A list consisting of traditional Hawaiian dishes cannot be comprehensive without including the laulau fish. This dish is perhaps the most common of all the dishes on the food list, and reviews abound. An important ingredient in the preparation of laulau is the leaf of the taro root plant. This plant is particularly popular around the Pacific islands and Polynesia and not just in Hawaii.

A typical laulau dish is made by wrapping pork with different taro leaves layers and then proceeding to cook it underground using hot rocks in an oven for hours until you achieve a smoky flavor, and the pork becomes tender. The meat becomes soft and juicy, the leaves on the other hand are left with a spinach-like texture. Today, you would easily find meals like chicken, pork, or fish laulau in Hawaii.

3. Poi
Another popular traditional Hawaiian cuisine is the filler starch dish popularly known as Poi. Poi consists of a thickened paste that is also made using taro root. It is either baked or steamed and then pounded. After cooking, the pounding process begins. The mixture is then made lighter by adding water, depending on your preference. Water is then added and mixed until the result is a mixture with a sticky consistency.

This delicacy has a remarkable flavor, and can be described as starchy and sour, depending on the level of fermentation in the process of preparation. It is often sold in powder form in Hawaii, but poi that is sold fresh offers the best taste.

4. Lomi Salmon (or the lomi-lomi salmon)
Although this delicacy is not native to the Hawaiian people, it still is popular on the menus of restaurants in Hawaii. It originally found its way to the shores of Hawaii from other surrounding Islands. The dish is now a popular part of most meals eaten by the locals and tourists. In its preparation, raw salmon is salted and chopped up with onions, tomatoes and occasionally chili peppers. The garnish can then be served alongside Poi and other delicacies. The salty flavor of the Lomi salmon and the pungent onions and acidic tomatoes gives a flavor too enticing to resist.

5. Poke
It doesn’t get more common than Poke. This dish is to Hawaii what sashimi is to Japan. It majorly consists of raw fish. Most visitors in Hawaii are introduced to this delicacy no matter where they go to eat. In Poke, the raw fish is not sliced thinly like in Japanese sashimi. Instead, it is chopped up in big cubes. The most popular fish used to prepare this dish is the Ahi, which is tuna. Several other types of saltwater fishes are also used in its preparation. Maui seafood restaurant Tante’s Fish Market is a is a very popular spot to get a really tasty Poke meal.

6. Chicken long rice
The recipe for Chicken long rice has roots in other cultures and traditions different from that of the Hawaiian people. It is inspired by a popular Chinese dish and, as such, shares several similarities. Chicken long rice consists of clear mung-bean noodles prepared with several bits of chicken and then cooked with ginger flavor. This meal can be eaten as a complete lunch meal anywhere in Hawaii.

7. Kimchi
A lot of the delicacies that are commonly found on the Hawaiian Island were invented and even became popular in other places around the world. One of such dishes is kimchi. This delicacy is of Korean origin and consists of salt-pickled cabbage. It can be served with other dishes and is often served as an appetizer on a “pupu” or on a platter.

So, the next time you go on that vacation, business retreat or even for work, be sure to try out any one of these popular mouth-watering dishes that will ensure you get a truly complete Hawaii experience.

Cooking Lebanese Food is an art and tasting it is even better. Some of my most favorite dinners are from home cooked recipies from Lebanon.